Covid-19 and Hospital Inequality; Why It’s Getting Worse, and How to Fix It 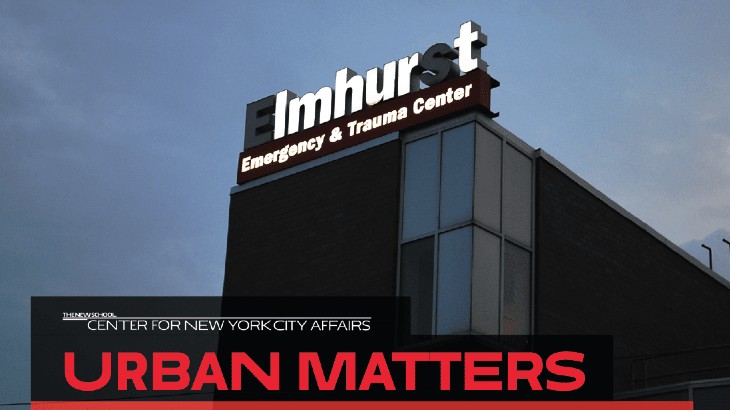 The Covid-19 pandemic is hitting the underfinanced hospitals serving thousands of poor and working-class New Yorkers the hardest. The emergency federal funds for hospitals haven’t corrected their inequitable status vis a vis far better-off private hospitals, and have even reinforced it. Now it’s up to State and City policymakers to straighten things out and make New York City’s hospital system work better for everyone.

That system has three principal elements. The city’s 11 public hospitals and clinics are administered by NYC Health +Hospitals. Then there are the private community hospitals serving low-income neighborhoods, which the State designates as “safety net” hospitals. Finally, there are the five large, private, and well-financed citywide hospital networks.

The system's inequities show up in hospital net operating revenues and depth of financial reserves. In recent financial statements, the public and community hospitals reported operating deficits. They ranged from an annual average of -$2.9 billion in the public system to -$21 to -$114 million a year for individual safety net institutions. In contrast, the five large private networks earned more than they spent. New York-Presbyterian’s net annual income was $557 million, according to a recent report from the Citizen’s Budget Commission.

New York-Presbyterian also had $14 billion in financial reserves, and each of the four other big systems had net assets of at least $1 billion. By contrast, NYC Health + Hospitals was $5.6 billion in the hole while Maimonides, the best-reserved of the safety nets, had $371 million on hand – enough to operate for three months at its then-current spending rate.

Then Covid-19 struck, flooding hospitals with sick people, many needing intensive care. Under orders from Governor Andrew Cuomo, hospitals stopped doing what earned them the most money. Most surgeries were postponed; clinics were curtailed or closed. The numbers of people treated for heart attack, stroke, cancer, and other serious illnesses plummeted – contributing to some 4,000 “excess” non-Covid deaths from mid-March to mid-April compared to the same period a year ago.

The networked hospital systems are currently losing $350-$450 million a month, according to Ken Raske, president of the Greater New York Hospital Association. While that’s hardly good news, the big systems can afford to carry losses for many months. But not the public and safety net hospitals. They not only have few or no reserves; most also serve communities suffering the worst effects of the pandemic. Queens, the Bronx, and Brooklyn have the largest share of cases and the smallest share of private, well-resourced beds. 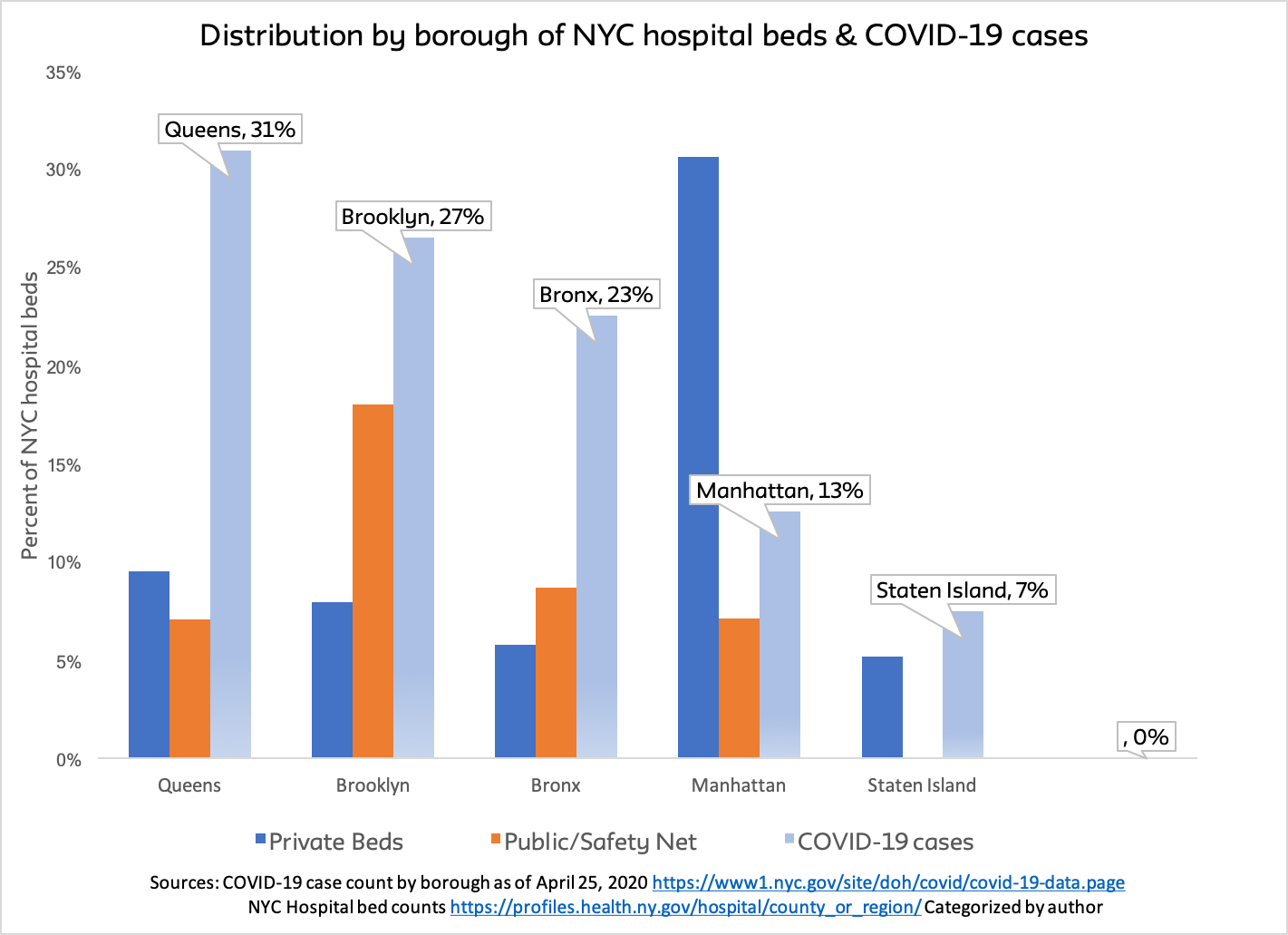 The assets and connections of the networked hospitals also continue to privilege them during the current crisis. Taking advantage of extremely low interest rates, NYU Langone hospital secured $300 million lines of credit in mid-April. Not that they couldn’t meet expenses, but it probably looked like a good opportunity for borrowing. A Mount Sinai Hospital trustee, Rich Friedman of Goldman Sachs, was able to get a favor from Warren Buffet’s private jet service to bring 500,000 N95 masks and 1.2 million surgical masks via a private Chinese airfield for use in Mount Sinai’s networked hospitals.

On the flip side are the chronically under-resourced public hospitals. In mid-April, at the crest of the outbreak, Mayor Bill de Blasio told reporters that H+H’s 11 hospitals had enough personal protective equipment (PPE) "for the next week.” An April 26 New York Times story reported that State-owned Downstate University Hospital in Brooklyn was not even that fortunate. Nurses and doctors there were wearing plastic tarps and using duct tape to secure their face shields. Meanwhile, interns and residents at hard-pressed public Elmhurst Hospital in Queens have been promised $300 per week in hazard pay; that’s $150 less than doctors at Mount Sinai are receiving.

On March 30 Governor Cuomo announced that the State plans to treat all the state’s hospitals as part of one system, sharing “supplies, staff, and other resources as needed.” As advisors to this effort, the Governor introduced Ken Raske and Michael Dowling, CEO of the state’s largest health care provider, Northwell Health. There were no public hospital or safety net attendees. Two days later, by Executive Order, the State Health Department was empowered to use the National Guard to move ventilators and PPE to the most overburdened hospitals.

Grand plans; no follow-up. Each week the State Health Department hosts a webinar on Covid-19 for the provider community. None of the three webinars since the governor’s announcement have mentioned his one state, one system plan.

The public funding that ought to be an equalizer has also been lacking. For example, the first $30 billion tranche of emergency Federal Covid-19 help to hospitals was distributed to the states based on numbers of Medicare fee-for-services patients. Despite being the epicenter of the US outbreak, New York State hospitals received $12,000 per Covid-19 case. Florida hospitals got 10 times that figure; Nebraska hospitals got 25 times New York’s per-case allocation.

New York State hospitals will fare better in the next wave of Federal funds; they’re expected to receive about 40 percent of $10 billion going to hardest-hit areas, with the lion’s share coming to City hospitals. But this allocation will rely on numbers of intensive care unit (ICU) beds and Covid-19 admissions per hospital. Missing from the distribution formula will be the percentage of a hospital’s resources used by Covid-19 patients, the amount a hospital has spent on treatment, what it can expect in insurance reimbursements, or even how many of its patients are uninsured. The networked hospitals contain 60 percent of the city’s total beds and a higher proportion than that of ICU beds. They will get most of the money. The public and safety net hospitals, despite bearing a disproportionate burden, will get less.

Typically, the safety net and public hospitals depend on City and State subsidies to keep afloat – and here, the severe economic contraction created by the pandemic paints a bleak picture, too. State Comptroller Thomas DiNapoli expects a revenue loss of $9-$15 billion this State Fiscal Year. The City’s Independent Budget Office has forecast losses of $2.9 billion, $6.7 billion, and $4.4 billion in City Fiscal Years 2020, 2021, and 2022. That make it likely that State and City subsidies will be smaller.

What might be done to secure a better future for the safety net and public hospitals as well as community health centers, public health departments and school health clinics – all programs serving poor and working-class New Yorkers? These five things.

First, the governor needs to rescind the Medicaid cuts he insisted be in the most recent State budget. This is not the time to cut Medicaid hospital reimbursements or reduce safety net hospital payments. During the pandemic, the State is paying enhanced Medicaid rates to hospitals. That needs to continue, with a shift towards chronically underfinanced psychiatric and substance abuse services disproportionately located at public and safety net hospitals and health centers.

Second, the State needs to quickly respond to the enormous increase in the number of uninsured resulting from layoffs and loss of employer-based health coverage. A million more New Yorkers are uninsured today than were six weeks ago. Some will qualify for Medicaid – but most won’t. They need deeper subsidies than currently exist to secure “Obamacare” insurance. The right to coverage should also be extended to all New Yorkers, regardless of citizenship status.

Third, the State should implement the governor’s announced integrated hospital program as permanent policy, insuring that scarce resources are allocated according to community need.

Fourth, the State Legislature should consider capturing the excess revenue of non-profit hospitals, as recommended in the recent Citizens Budget Commission report. In 2018, the five large private systems serving New York City earned $1.5 billion more than they spent. A substantial chunk of that money would go a long way toward redressing hospital inequality.

Fifth, and most critically, State and City governments need to commit to equality. Every institution ought to have the resources to provide the best, needed care. Whether a hospital is located in Elmhurst or Manhattan’s Upper East Side is an accident of history. Geography and ownership ought not be destiny. That’s why we have government.